This is a really humorous video that really gets at the core of this discussion.
Money is something we made up.

Her tiktok attracted a lot of people lecturing her on inflation, about how raising the money supply devalues the money. What those responses are missing is the key statement in the video.
“You let THIS happen!” she exclaims holding up a plastic 5$ bill and plastic 50$ bill side-by side.

What exactly did we “let happen”?

A third of Americans still believe the US dollar is backed by real, tangible value in the form of gold. This hasn’t been true for quite some time, and that is why our central bank currencies are also called fiat currencies. It is almost a guarantee that you, the reader reader are paid, taxed, and earning income in a central bank currency known either as dollars, euros, or any other national currency. This has already had significant impact of society.

What is a central bank?

A central bank is a “bank for banks”.
“Why would a bank need a bank?”
Your deposits at a bank are a liability to that bank, they have legally needed “bank money* called reserves to offset that liability on their balance sheet.

John titus does a fantastic job explaining how this works, and has changed during the Covid Crisis. 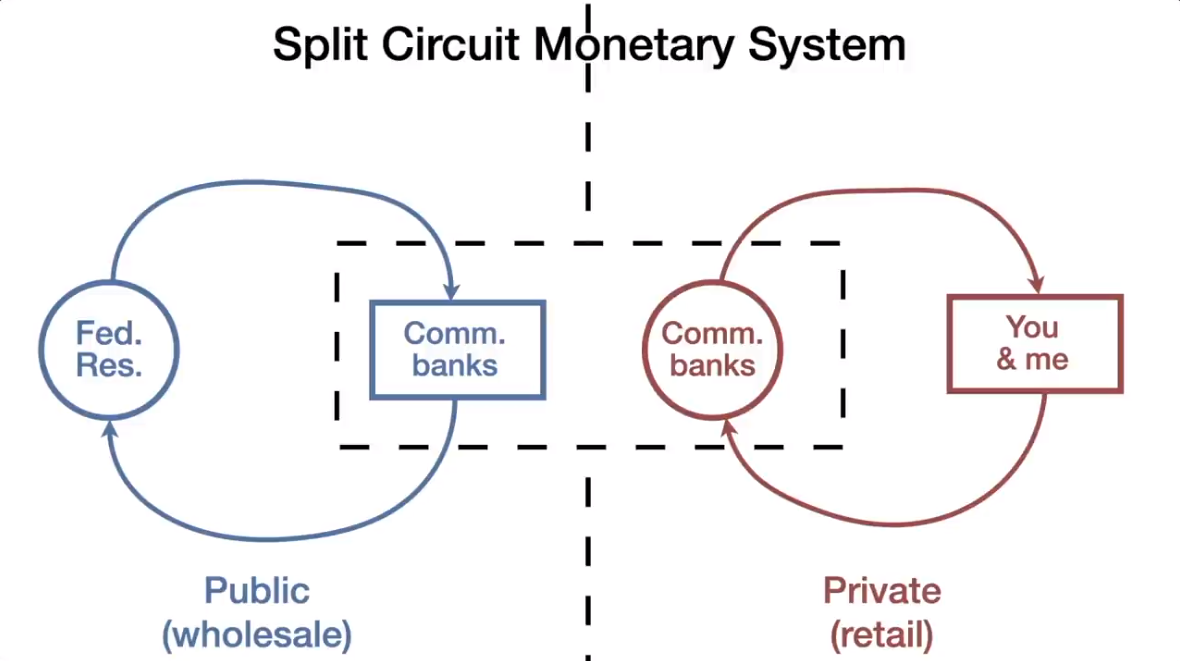 Central banks are corporations, that lend money to governments and other banks. Central banking is effectively the death of free enterprise, not only do market participants have to out-compete vertical monopolies but also entities with the power to create and distribute money from nothing. This power effectively means that some participants experience lavish success in a simulated economy, while those outside the simulated economy must operate in the harshest of economic conditions. Before countries entirely adopt CBDCs en-masse, now is the perfect time to consider (if not the last time) if central banks are institutions that ought to be abolished entirely. Online payment processors allow people to seamlessly transact. Most payment processors use central bank currencies because for most people they are the only currency they use. These payment processors have significant leverage over those reliant on them. As if monetary policy didn’t distort the economy enough, now payment processors are eager to show they can be proactive in surveilling, fining, and otherwise restricting their users. This is because they will be effectively competing with CBDCs in these areas.

Satoshi made history when he created the first digital currency with no central issuing authority that couldn’t be counterfeit. This was no small feat. By using the power of raw computing power, Bitcoin is still the largest mover in the huge cryptocurrency space. Not all cryptocurrencies are decentralized. As computing power, or financial control ramp up, only time will tell how many truly decentralized projects will survive.

The biggest challenge with cryptocurrency in our current age is that money is only part of our current troubles. We can all switch to a “silver bullet” system tomorrow and there would still be immense damage to be undone. Just as money is a construct we create, it is also entirely reliant on the rule of law. No money, no matter how secure or private can itself alone overthrow tyrants.

What is a CBDC really?

The major threat that new CBDCs present is that they are highly likely to be streamlined with the following properties:

In addition to having control of every transaction, programmable currencies allow participants to enter new kinds of transactions. This could include all kinds of things, such as directly monetizing surveillance. Automated systems could be used to enhance these digital contracts.

As Mathew Crawford points out: “A networks value increases exponentially in relation to the number of its users” it wouldn’t make sense to limit total top-down financial control to a single jurisdiction. Eventually a global uni-system could be built on top without the participants having any power to prevent the change.

These things can enable an industrial revolution without people. The technocrats don’t just believe they’ve won in finance, but all of human history and evolution. They intend to transform all our countries into giant (but shrinking) open-air prisons.

Odds are essential workers will likely not be lucky enough to use the state-issued CBDC. Instead they may be restricted to using their companies Corporate-Backed Digital Currency, a modern version of the company store. These indentured servants would have no capacity to transact outside approved channels.

One of the greatest threats to private property rights.

It is critical not to simply be reflexively averse to a central bank digital currency, and naive to the threads presented by corporate backed digital currencies. Where convenient I recommend mentioning both in similar situations.

Frustratingly, it doesn’t take much imagination to guess how these systems will be used. We have already seen mass de-platforming by financial institutions as a means of censorship. So many things that could be done with a CBDC has already been done on either as a whole, or with specific interventions.

Other encroachments will be much more sinister and harder to predict. New functionality and advancements in technology will open up unimaginable possibilities. No single person would be capable of understanding it all, making anyone who attempts to sound mad to those who haven’t.

Surveillance itself is enough of an invasion, regardless what it is being used for. People deserve the right to make mistakes, learn, and grow as people. It is troubling in an age where there is hardly any accountability for those at the top, the public is being targeted for any kind of micro-infraction. The only way to restore a free and fair society is to tilt the scales in the opposite direction.

Programmable currencies are entirely able to dictate their use. No transaction is permanent, likely only the record of it is. This can be used to develop powerful feedback loops to entirely eliminate dissent.

Reprisals for unapproved actions can be harsh and all-encompassing. Not only are you entirely vulnerable to the whims of the system, those around you will also face the same consequences for lending support.

Using financial control to manipulate the public is already being tested.

With additional forms of contracts punishments can be fine-tuned to elicit very specific responses. All kinds of virtual systems can be precisely configured to represent your deemed place in society.

Central planning in any form is civilization’s equivalent of putting all your eggs in one basket…over a cliff. It is a total failure mode of any human system and should be avoided at all costs. When these schemes inevitably go wrong, so much damage to lives, communities, and vital human capital is often unrecoverable.

Or more importantly, why the rush?
There are a variety of factors that mean that the powers that ought not to be might not really have time on their side when it comes to preparing alternative financial systems.

Chris Martenson’s Crash Course used to be a prediction, in 2022 it’s more of a look in the rear view mirror. It is an essential framework for understanding how our existing financial systems have been hijacked to create inevitable ruin.

The course revolves around the “Three ‘E’s” which are fundamental concepts for understanding our changing world:

Chris points out our exponential debt-based financial system only has two modes: rapidly expanding, and collapsing. This gets more dire in each iteration. The system requires exponentially larger expansion to continue each time and there’s only so much finite production and energy that are possible within a given moment in time.

Lynette Zang at ITM trading is a fantastic resource for understanding the “financial reset”. She is quite knowledgeable about the history of currencies and often has unique insight about where we are in the “currency lifecycle”.

One of her most important points is that the central banker’s game is entirely one of confidence. Their only constraint is how quickly people lose faith in the entire system. Your consent is part of what allows their schemes to succeed. She highly recommends possessing physical gold as a means to withdraw that consent.

Murder of a Rebel Nation

Best evidence is a treasure. John Titus can explain complicated financial concepts in a way that is remarkably accessible. He’s published many great videos addressing the bailouts and lack of criminal prosecution since the great financial crisis.

He also has a substack at https://bestevidence.substack.com/

As the world changes so do alliances and incentives. Many brilliant minds have suggested that the Covid Crisis could be a painful diversion from an ongoing geopolitical Struggle.

Regardless of the underlying reasons we can almost certainly expect future disruptions and difficulties. If nothing else please find ways to be more resilient yourself and take care of others.

Tank your social credit score in advance! The most powerful tool the technocracy has to influence you is your own mind. Deliberately properly aligning the incentives yourself can go a long way.

Authentic peaceful disobedience is priceless in these times. As aggrivating as things are it’s important to understand that it’s our duty to demonstrate that all peaceful options have been exhausted.

We can not engineer nor evade our way around the fact that the rule of law is precious and needs to be restored. There is hardly any reason to start new laws and constitutions from scratch when we can’t even enforce existing ones. Greater transparency and accountability will pay dividends in all other aspects of working for freedom.

A great way to eliminate financial incentives is to provide what you can without financial strings. Cooperation is at a premium these days, so there is much to gain from sharing with others. Building a robust safety-net for those ejected from the social credit system is a pre-requisite for mass resistance.

I’m not particularly biased towards any asset or commodity, but I am highly skeptical of any solution that doesn’t re-ground society back to tangible value. Our manipulated currencies have corrupted even trivial incentives for so long that I doubt we can avoid facing those consequences. This is why it is all-the-more important that high-profile criminals be prosecuted for their ill-gotten-gains.

Anything that values human beings and their time more is a good thing. The technocracy has aimed to glamorize a future without other people. If we all have to embrace barter to resist tyranny, time banking is a very efficient model.

While any and all useful digital systems should be used for what they can, relying on a single global blockchain may be an inefficient option for regions that may face radically different circumstances. Building an online bank from the ground up is not a technically sophisticated task. Anyone capable of creating a dynamic website is capable of building a functional prototype. The main difficulties are around physical security and accountability for the assets.